19 December 2018
As a depigmentation disorder hypomelanosis vitiligo is the most well known of all leucodermatoses (“white skin”) whereby other variants of loss of skin pigmentation temporary or permanent are described as albinism, piebaldism pityriasis alba, tuberous sclerosis, idiopathic guttate hypomelanosis and tinea versicolor.

The precise mechanism which leads to generalised loss of skin pigmentation is still unknown. Patients with immunological disorders do have a higher prevalence of vitiligo. That is not to say that vitiligo patients necessarily suffer from immune disorders, since many of these patients have no other underlying disease. At the current state of clinical practice it is believed that in vitiligo pigment cells ( become dysregulated and susceptible to intracellular oxidative stress, and therefore lose the ability to produce melanin (due to increased activity of antigen specific T cells (immune cells). It is thought that the intracellular pathways through protein expressions and signalling via IFN γ STAT 1 CXCL 10 are part of the primary inflammatory pathway responsible for both progression and maintenance of the condition. ¹ ²

In some regions across Africa and Asia the social stigma of the disease is very high it is also often confused with leprosy Sweta Kushta white leprosy). 3

In North America, the disease is most prominent among African Americans and other individuals of darker skin types. In psychological assessment of vitiligo patients, some studies found that two thirds of the patients were embarrassed by vitiligo and over 50% of patients felt ill at ease, anxious, concerned and worried Patients report being stigmatised by their disease, as they often feel stared at, discriminated against, and subject to verbal abuse.

Previous
Next
The disease obtained wider attention when “King of Pop” Michael Jackson was diagnosed with vitiligo in 1984 and over the following decades he gradually lost his characteristic skin colour. Approximately 0.5 to 2% of the global population suffers from vitiligo, whereby it is estimated that for 25 of patients more than 10 of their total skin surface is affected.

Various skin type classifications have been used over the years, but the most frequent one reported is the Fitzpatrick scale, categorised by one’s propensity to burn when exposed to ultraviolet light Figure 3 below summarises the classification.

The current attempts to treat vitiligo have been largely unsuccessful, with sporadic reports of repigmentation but no clinically meaningful, safe treatment option available that ensures long term repigmentation of the skin. Therapy aims to arrest depigmentation and then reinduce pigment through the transplant or stimulation of newly formed melanocytes, however treatment is time consuming and often frustrating for patients and physicians alike. The standard of care, by lack of any other effective therapy, remains narrowband UVB (NB-UVB), electromagnetic radiation at 311 nanometers wavelength.

The standard NB UVB regimen globally is two to three weekly exposures for a duration of 12 to 18 months, depending on the clinical response of patients. In general, the clinical results are inconsistent and poor, with many patients relapsing within 12 months.

Other therapies such as local corticosteroids, mTor inhibitors, monoclonal antibodies, psoralen and skin grafting (transplants) have been tried without meaningful clinical results. Among the expert community of vitiligo physicians, there is a consensus that an effective repigmentation treatment is due and much desired.

The most resistant skin surface areas – those areas which show no response to any treatment – are the hands and feet. 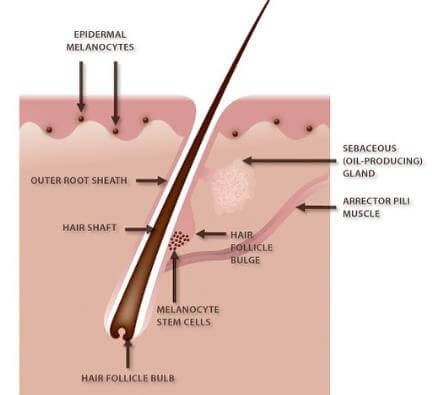 SIGNIFICANCE OF RESULTS CUV102 AND CUV103

Clinical statistical analyses from the North American study in 41 vitiligo patients (CUV102) demonstrated that, in comparison with patients receiving the monotherapy NB-UVB twice per week, those who had received the combination therapy NB-UVB with afamelanotide 16mg (SCENESSE®) expressed significantly more (re)pigmentation after six months (p=0.025). By using the Vitiligo Area Scoring Index (VASI) and photography before and after treatment it was shown that repigmentation occurred homogenously over the body surface.

Clinically important was the finding that patients who had received the combination therapy achieved earlier repigmentation than those on monotherapy (median time 43 days versus 68 days, p=0.086; 95% CI). In other words, the additional effects of the drug treatment became meaningful 43 days after starting the drug therapy. In assessing the highest therapeutic benefit, those vitiligo patients with skin types IV, V and VI showed a statistically superior degree of repigmentation following the combination drug treatment.

The results of the Singaporean CUV103 study where 18 vitiligo patients received SCENESSE® and NB-UVB demonstrated statistically significant improvement [i.e decrease in the VASI scores] from baseline (Day 0) to end of the treatment (Day 196 – after six doses of afamelanotide and seven months of NB-UVB) for the total body surface (p<0.001), and also for individual body areas: head and neck (p<0.001) and hands, upper extremities, trunk and lower extremities (p<0.05).

The studies individually showed that the SCENESSE® treatment led to follicular repigmentation and meaningful clinical results within six months. A cultural difference has become apparent in vitiligo patients and their ability to accept increases in pandermal (total skin surface) pigmentation.

For the first time, the patients of Asian descent expressed concerns at the overall temporary epidermal darkening induced by afamelanotide in combination with NB-UVB because skin darkening is culturally and socially unacceptable in Asian populations. This finding is significant compared to the willingness by African American patients who expressed having lost their colour and identity. Skin colour and vitiligo are in various regions of the world culturally charged and impact patients in various forms.

In North-America, patients are generally well organised through vitiligo patient advocacy groups and online support networks. These groups are listed in table 1.

These groups aim to provide support and resources to vitiligo patients beyond that provided by clinical care, ranging from communicating updates on research to the community through to advocating for treatment access and advising on camouflage techniques. Most often it is simply by providing vitiligo patients and their families with an outlet to be heard that provides the greatest support, particularly in the early stages of the disease. 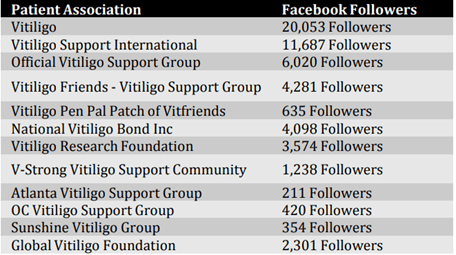 CLINUVEL PHARMACEUTICALS LTD (ASX: CUV; NASDAQ INTERNATIONAL DESIGNATION ADR: CLVLY; XETRA-DAX: UR9) is a global biopharmaceutical company focused on developing and delivering treatments for patients with a range of severe genetic and skin disorders. As pioneers in photomedicine and understanding the interaction of light and human biology, CLINUVEL’s research and development has led to innovative treatments for patient populations with a clinical need for photoprotection and repigmentation. These patient groups range in size from 5,000 to 45 million worldwide. CLINUVEL’s lead compound, SCENESSE® (afamelanotide 16mg), was approved by the European Commission in 2014 for the prevention of phototoxicity (anaphylactoid reactions and burns) in adult patients with erythropoietic protoporphyria (EPP). More information on EPP can be found at http://www.epp.care. Headquartered in Melbourne, Australia, CLINUVEL has operations in Europe, Switzerland, the US and Singapore, with the UK acting as the EU distribution centre. For more information go to http://www.clinuvel.com.

This release contains forward-looking statements, which reflect the current beliefs and expectations of CLINUVEL’s management. Statements may involve a number of known and unknown risks that could cause our future results, performance or achievements to differ significantly from those expressed or implied by such forward-looking statements. Important factors that could cause or contribute to such differences include risks relating to: our ability to develop and commercialise pharmaceutical products, including our ability to develop, manufacture, market and sell biopharmaceutical products; competition for our products, especially SCENESSE® (afamelanotide 16mg); our ability to achieve expected safety and efficacy results through our innovative R&D efforts; the effectiveness of our patents and other protections for innovative products, particularly in view of national and regional variations in patent laws; our potential exposure to product liability claims to the extent not covered by insurance; increased government scrutiny in either Australia, the U.S., Europe and Japan of our agreements with third parties and suppliers; our exposure to currency fluctuations and restrictions as well as credit risks; the effects of reforms in healthcare regulation and pharmaceutical pricing and reimbursement; that the Company may incur unexpected delays in the outsourced manufacturing of SCENESSE® which may lead to it being unable to supply its commercial markets and/or clinical trial programs; any failures to comply with any government payment system (i.e.Medicare) reporting and payment obligations; uncertainties surrounding the legislative and regulatory pathways for the registration and approval of biotechnology based products; decisions by regulatory authorities regarding approval of our products as well as their decisions regarding label claims; any failure to retain or attract key personnel and managerial talent; the impact of broader change within the pharmaceutical industry and related industries; potential changes to tax liabilities or legislation; environmental risks; and other factors that have been discussed in our 2018 Annual Report. Forwardlooking statements speak only as of the date on which they are made and the Company undertakes no obligation, outside of those required under applicable laws or relevant listing rules of the Australian Securities Exchange, to update or revise any forward-looking statement, whether as a result of new information, future events or otherwise. More information on the forecasts and estimates is available on request. Past performance is not an indicator of future performance.