CLINUVEL’s pharmaceutical development to date has focused on melanocortins, a group of small protein hormones that develop from the gene product proopiomelanocortin (POMC).

These hormones affect physiological activity in the body by binding with specific receptors; the melanocortin receptors, of which there are currently five identified: MC1R – MC5R. These receptors are prolific within the human body and present in virtually every organ, making the effects of the melanocortins widespread and varied.

Known physiological activity influenced by the melanocortins includes pigmentation, inflammation, energy homeostasis, appetite and sexual function. Melanocortins expressed in the brain, or those which cross the Blood Brain Barrier (BBB) and bind with MC3R and MC4R (the third and fourth melanocortin receptors) are thought to play a fundamental role in feeding and body weight. Melanocortin hormones are also expressed in peripheral tissues including testes, ovaries, placenta, duodenum, liver, kidneys and skin, where they can have a more localised (autocrine or paracrine) response.

Alpha-Melanocyte Stimulating Hormone (α-MSH) is a protein hormone produced in the body. It is part of a family of peptides known as melanocortins, all of which are cleaved from the precursor polypeptide proopiomelanocortin (POMC) and bind to specific melanocortin receptors throughout the body. α-MSH consists of 13 amino acids, with the sequence Ac-Ser-Tyr-Ser-Met-Glu-His-Phe-Arg-Trp-Gly-Lys-Pro-Val.

Of the five known melanocortin receptors, α-MSH binds with various affinities to MC1R, MC3R, MC4R and MC5R. When bound to each of these receptors it is believed to have roles in: regulating pigmentation and inflammation; DNA repair; energy homeostasis and sexual behavior; appetite regulation; and exocrine function.

Alpha-Melanocyte Stimulating Hormone in the skin

It is α-MSH’s role regulating pigment (melanin) in the skin which is arguably best understood. In the skin, α-MSH is produced by epidermal skin cells (keratinocytes and, less commonly, melanocytes and Langerhans cells) as a protective response to damage caused by ultraviolet (UV) radiation.

Alpha-MSH molecules then bind with the MC1R on melanocytes (pigment producing cell) to activate the production of melanin (via a series of chemical reactions known as a signalling pathway). Following this process, melanin granules are deposited in packages called melanosomes which are then transported to the ends of the melanocyte projections, called dendrites.

The tips of these dendrites are then enveloped by nearby keratinocytes into which the melanosomes are released. These spread out to form a pigmented, protective barrier over the keratinocyte’s nucleus. The melanin acts to shield this cell from further UV damage by absorbing, reflecting and refracting light.

In addition to activating melanin, α-MSH is known to have several other roles in the skin, although the exact mechanisms are not fully understood. Recent research has shown that α-MSH enhances the repair of DNA damage (such as cyclobutane pyrimidine dimers or CPDs) – a process known as nucleotide excision repair or NER – and reduces the generation of free radicals (particularly hydrogen peroxide) following UVR impact. Both of these factors reduce the overall damage caused by UVR, thus reducing the risk factors for certain skin cancers. One mitigating factor, however, is that α-MSH must be able to bind to the MC1R to achieve this function. In some fairer skin types, and in individuals with mutations or damage to the MC1R, the normal response when α-MSH binds to the MC1R is significantly impaired or absent. Alpha-MSH is also known to play a role in inhibiting both the expression and activity of pro-inflammatory molecules (cytokines) in the skin.

Photoprotection is protection from the damage caused by ultraviolet (UV) and visible light, used here to describe protection of human skin. These wavelengths of light (10-750nm) have a range of damaging effects on skin, including: sunburn, photoaging, DNA damage, carcinogenesis (development of cancer) and a range of symptoms specific to certain medical conditions.

Eumelanin, one part of melanin, is the brown-black coloured pigment produced by the skin. It acts as a photoprotectant by absorbing part of the incoming UV radiation and dissipating it safely. Its properties of reflectance also make melanin capable of scattering and refracting damaging UV rays away from the skin.

Melanin is produced in the outermost later of the skin, the epidermis, in a specific type of cell known as a melanocyte. When the drug afamelanotide is administered it comes into direct contact with the melanocytes. There it binds to receptors on the outside of the cells called melanocortin 1, or MC1R. This binding activates a series of chemical reactions which lead to a number of effects, including an increase in the production of melanin. The process of melanin synthesis is known as melanogenesis.

Melanin is made and stored in a small pouch inside the melanocyte, called a melanosome. The melanosomes are then transported from the melanocyte, via tentacle-like projections called dendrites, to another type of cell on the surface of the skin – keratinocytes. Once inside the keratinocytes, the melanosomes containing the eumelanin pigment spread out like an umbrella and protect the skin cells and their genetic information from damage caused by UV light exposure.

Photodermatoses are a group of cutaneous disorders that have in common an abnormal reaction to light exposure. Some of these disorders are illustrated on the light spectrum to the right, showing the wavelength at which they are triggered.

All sunlight
Peak at 408nm. Specific wavelength depends on sensitivity of the individual.

UV and Visible light
Diagnosis is based on uroporphyrin I and coporphyrin I present in blood plasma spectrofluorimetry seen at 400-410nm.

Diagnosed by the presence of a specific plasma fluorometric emission at 626nm.

Alpha melanocyte stimulating hormone (α-MSH) has been shown to play several vital roles in promoting the return of pigment (repigmentation) to patches of vitiliginous skin. Along with other factors, it stimulates immature melanocytes, known as melanocyte stem cells, to multiply and develop into fully functioning melanocytes.

It also assists cell migration, from within hair follicles, to the epidermis of the skin. Once at the epidermis, α-MSH further affects the melanocytes, stimulating them to produce melanin through the expression of genes critical to this process. SCENESSE® (afamelanotide 16mg), an analogue of α-MSH, is anticipated to aid the repigmentation of lesions in vitiligo patients by these same mechanisms.

SCENESSE®’s effects are being investigated in combination with the physical stimulant narrow-band ultraviolet B phototherapy (NB-UVB). UVB radiation is a potent melanocyte stimulant and NB-UVB is currently seen as one of the most effective therapies available for vitiligo. The addition of SCENESSE® to this treatment modality is expected to assist the repigmentation process initiated by NB-UVB. It is anticipated that repigmentation of the skin will be achieved more rapidly, allowing for a reduction in the patient’s exposure to UV light; this could potentially decrease the risk of NB-UVB side effects.

CLINUVEL has conducted over 15 trials of SCENESSE® (afamelanotide 16mg) involving over 900 patients, published research from which can be purchased online.

Below is a selection of published research on SCENESSE®. These links direct you to sites outside of the control of CLINUVEL which are not produced or endorsed by CLINUVEL.

Lane, AM, McKay, JT, Bonkovsky, HL. Advances in the management of erythropoietic protoporphyria–role of afamelanotide. The application of clinical genetics. 2016;9:179.

Lane, AM, McKay, JT, Bonkovsky, HL. Advances in the management of erythropoietic protoporphyria–role of afamelanotide. The application of clinical genetics. 2016;9:179.

CLINUVEL publishes regular updates on the science and technology underpinning our research and development. The technology updates below provide insight into areas of CLINUVEL’s research.

The Scientific Communiqués provide an in-depth look at the work we conduct and the rationale for developing melanocortins. 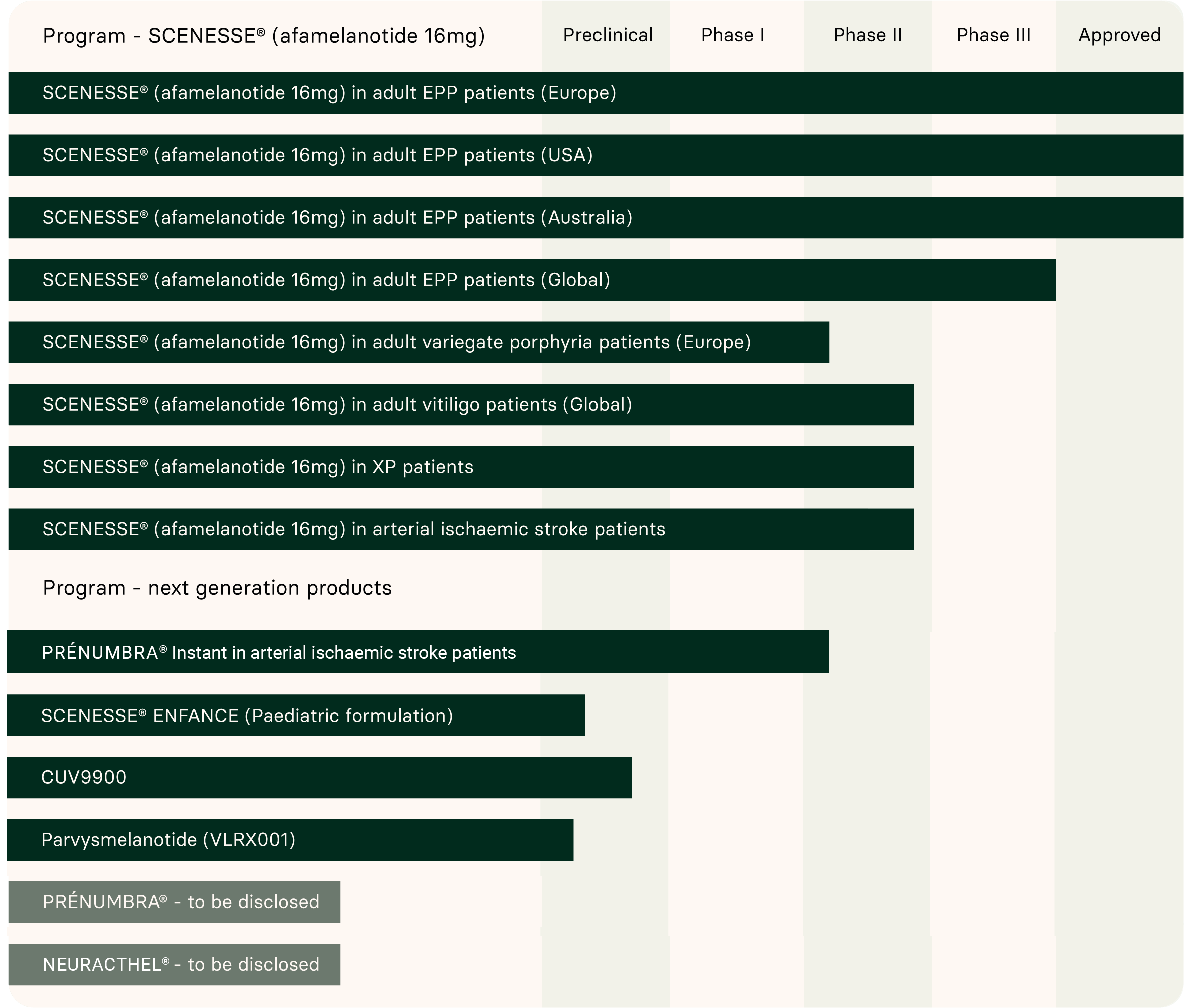 CLINUVEL opened the first VALLAURIX facility in Singapore in 2014 with an emphasis on experimental and analytical output. The new laboratories opened in 2020 affirm CLINUVEL’s focus on key areas such as molecular profiling, peptide chemistry and polymer science.

Initial parallel projects include the launch of an OTC product line, stability data and commissioned manufacturing for PRÉNUMBRA®, and formulation of second-generation melanocortins including CUV9900, phimelanotide and parvysmelanotide.

THE FACILITIES COMPRISE ANALYTICAL AND BIOLOGICAL LABORATORIES WITH KEY FUNCTIONS INCLUDING:

PRÉNUMBRA® is a liquid (non-solid) injectable formulation of afamelanotide designed for administration by a healthcare professional and intended to provide a flexible dose of afamelanotide, a synthetic analogue of natural α-melanocyte stimulating hormone.

Pre-clinical and clinical studies have shown afamelanotide to be effective in targeting various organ systems with potential to address a number of disorders. The development of PRÉNUMBRA® will evaluate the safety and efficacy of afamelanotide in acute and systemic diseases, specifically as a potent vasoactive drug which counteracts fluid formation in tissues.

Stroke was selected as the first clinical target for PRÉNUMBRA® Instant. This formulation was designed to allow physicians to administer a fast-acting, flexible dosage formulation of the active ingredient afamelanotide, enabling physicians to personalise treatment in acute care.

Working under an exclusive agreement, the PRÉNUMBRA® Instant presentation is manufactured according to current Good Manufacturing Practice (cGMP) guidelines for use in clinical trials. Further clinical targets for PRÉNUMBRA® Instant are under evaluation, including other disorders of the central nervous system (CNS).

CLINUVEL has a commercial agreement with one of its strategic partners for the scaled supply of adrenocorticotropic hormone (ACTH) drug substance to current Good Manufacturing Practices (cGMP) standard.

Translating its expertise in melanocortins and formulation development, CLINUVEL will be commercialising NEURACTHEL® (ACTH) in multiple dosage forms for patients in need of medical treatment.

CUV9900 is an alpha-Melanocyte Stimulating Hormone (alpha-MSH) analogue. Initial research has shown that CUV9900 is a potent skin protectant. CLINUVEL intends to launch CUV9900 in various new formulations. Formulation work has commenced and CLINUVEL expects the first formulations to be available for clinical testing after the commercialisation of SCENESSE® in Europe.

Parvysmelanotide (VLRX001) is an addition to the family of melanocortin analogues which provoke increased and prolonged cellular activity. It contains a specific peptide sequence, designed to make it less susceptible to degradation than physiologic (natural) alpha-melanocyte stimulating hormone (α-MSH).

The VLRX001 development work was undertaken through CLINUVEL’s Singaporean subsidiary, VALLAURIX and has leveraged the knowledge gained from long term experience with the clinical use of SCENESSE®. Formulation work will focus on the development of VLRX001 for topical self-administration by patients. The transdermal product will initially be evaluated as adjuvant maintenance therapy in the depigmentation disorder vitiligo. Overall, the development of VLRX001 is part of CLINUVEL’s life cycle management of its portfolio of products to ensure long term use and value of its technology and assets. CLINUVEL will hold all rights to the final product and indications through VALLAURIX.

Questions?
Get in touch.