CLINUVEL completed the fourth full year of commercial operations in Europe and, in April 2020, started the distribution of SCENESSE® (afamelanotide 16mg)¹ in the USA. The coronavirus pandemic has caused the most significant worldwide economic contraction since the 1929 Great Depression, with many of the countries in which CLINUVEL operates still experiencing lockdowns and disruptions to daily life and commercial operations.

CLINUVEL continues to expand the supply of SCENESSE® in Europe. Cash receipts for the quarter were $10,403,000 constituting a net cash flow from operating activities of $7,175,000. All receipts relate to the supply of SCENESSE® to erythropoietic protoporphyria (EPP) Expert Centres across key European countries, including supply under special access to Switzerland. 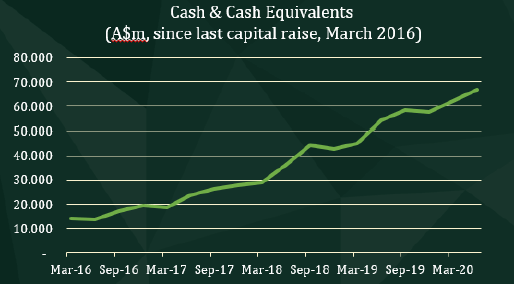 During the pandemic, the majority of Expert Centres continued prescription of SCENESSE® due to the ongoing clinical demand, while a small number of Centres either deferred orders or reduced order sizes in the initial months of the COVID infections. These few Centres were not able to provide treatment access to patients, or patients were unable to travel to Centres. Despite the uncertainty surrounding the pandemic, it was pleasing to learn that patient demand for SCENESSE® remained high, with existing patients continuing to seek treatment and new patients receiving treatment for the first time.

The cash receipts continued the positive trend seen in recent years, where the number of unit orders progressively increases when patients become more prone to exposure to stronger ambient light sources in the spring and summer months. The price of SCENESSE® was uniform across Europe throughout the quarter.

The adjacent graph illustrates the rising and progressive trend in annual cash receipts over the past eight successive rolling quarters. The controlled increases to annual net operating expenditures are assessed and balanced on a rolling annual basis to manage and support the growth and R&D investments of the Group. 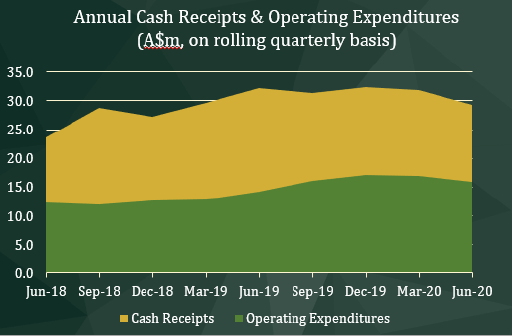 Expenditures from net operating activities in the quarter were according to the Company’s business plans and broadly in line with the prior quarter, increasing by 1% to $3,433,000. These do not include the impact of any interest received from placing excess funds in term deposit, along with payments received from various government business support or stimulus packages in response to the coronavirus pandemic. The product manufacturing and operating cost category was $1,054,000, rising 64% when compared to the prior quarter, reflecting the increase in payments to support distribution and supply of the product into Europe and the USA meeting, cyclical and seasonal demand in the northern hemisphere. Staff costs for the June quarter do not include annual remuneration-related payments to staff.

On an annual basis, as part of the planned expansion of the Group, total net expenditures from operations rose 11.7% in the year to 30 June 2020, with product manufacturing and operating costs, and staff costs each rising by 16%.

In April 2020, CLINUVEL commenced distribution of SCENESSE® for adult EPP patients with the first US insurance companies initiating reimbursement for treatment under Prior Authorization. Cash receipts for the June quarter 2020 did not include any receipts from the supply of SCENESSE® in the US market. The Company expects, in these early stages of US launch, that payment terms may be longer in duration than the 30 to 60 days average length of payment term in Europe.

REVIEW OF OTHER KEY ACTIVITIES

The Group saw continued progress in its corporate, clinical and research and development work throughout the quarter despite an adverse operating environment.

While the expansion of the Group’s Singapore laboratory was affected by government’s circuit-breaker to contain the pandemic, most of the $466,000 in cash outflows from investing activities was incurred for this expansion and development work was largely unaffected. It is expected the new facilities will be completed by the end of the third quarter of calendar year 2020 to further progress R&D on novel melanocortins, and prescription and over-the-counter products.

The Group continues to work with the Therapeutic Goods Administration (TGA) as it evaluates SCENESSE® under a priority registration pathway as the first proposed therapy for adult patients with EPP in Australia. A series of exchanges have occurred between CLINUVEL and the TGA, as is usually expected under a scientific review, and the Group expects the TGA to conclude its evaluation by the end of calendar year 2020.

In April 2020, CLINUVEL entered a Collaboration Agreement to launch SCENESSE® (afamelanotide 16mg) under a Named Patient Program (NPP) for the treatment of EPP patients in the People’s Republic of China. The collaboration with HK Winhealth Pharma Group Co. Limited focuses on facilitating early access for Chinese EPP patients while collecting data for a new drug application (NDA) to the Chinese National Medical Products Administration (NMPA). Safety and effectiveness data captured under the NPP will be included in a Chinese NDA alongside data captured from CLINUVEL’s clinical trial and pre- and post-authorisation programs in Europe and the USA.

The Group continued work to plan and prepare for future clinical initiatives to develop novel treatments for patients with severe genetic and skin disorders who lack therapeutic alternatives. A Type C Guidance meeting was held with the US Food and Drug Administration (FDA) on 29 April 2020 to seek agreement on the design of a multicentre Phase IIb clinical study and the data package necessary to support a supplemental New Drug Application filing for SCENESSE® in the pigment loss disorder vitiligo. There are no approved pharmaceutical treatments for vitiligo, a disease which affects between 0.5% and 2% of the US population, where various mechanisms result in the loss of pigment producing cells. The Company is working with clinical experts to finalise clinical study protocols. Further clinical and regulatory work is underway to establish a new program to evaluate afamelanotide in DNA repair.

Post the June quarter 2020, this month the Group announced the development of a second formulation of afamelanotide, PRÉNUMBRA®. This liquid controlled-release formulation is to be evaluated in clinical trials for acute disorders and vascular anomalies.

“Against the global economic contraction, CLINUVEL is best positioned to invest in its planned growth and expansion, and patient demand for treatment has been largely unaffected, a testament to the impact of EPP on patients’ lives and their need for ongoing treatment,” CLINUVEL’s Chief Financial Officer, Mr Darren Keamy said.

“Looking back, we have had a clear, long-held, view on how to optimise our resources and prepare for adverse economic conditions. By maintaining a strong cash position, we are able to respond to changes quickly and nimbly, limiting the need to return to investors to access capital and allowing us to focus on the long-term growth of the Group,” Mr Keamy said.

Although the Company is not obligated to publish quarterly cash flow results, it elects to do so to keep its investors periodically updated. A copy of the Appendix 4C – Quarterly Cash Flow Report for the fourth quarter of FY2020 is attached.

Pursuant to Listing Rule 4.7C and as disclosed in Item 6.1 to the attached Appendix 4C, $100,000 was paid in respect to non-executive Director and Managing Director fees.