CLINUVEL has released a video of executive management discussing the Appendix 4C – click here for more.

Patient demand for treatment with CLINUVEL’s innovative drug SCENESSE® (afamelanotide 16mg) has increased year-on-year, with growth seen in both Europe and the USA throughout 2021. The drug – the world’s only approved therapy for the rare metabolic disorder erythropoietic protoporphyria (EPP)1 – was also made available to patients in Israel for the first time in 2021, following its addition to the Israeli National Health Basket.

Increasing demand for CLINUVEL’s commercial product underlies the rising trend in the Company’s cash receipts which continued in the December quarter to round-out a strong 58.4% increase for the 2021 calendar year. This is despite the ongoing impact of COVID-19 on the operating environment with disrupted supply chains and stress on the healthcare sector to maintain ongoing treatments.

CLINUVEL’s cash receipts, coupled with prudent control of expenditures, are enabling the progress of a multi-pronged strategy to:

This strategy is in place to build a diversified and sustainable specialty pharmaceutical group and to enhance the quality of life and well-being of many patient groups and individuals in the wider population.

CLINUVEL recorded cash receipts of $13,120,000 and net operating cash flows of $5,745,000 for the December quarter of 2021. The cash receipt result is more than double the highest cash receipt result recorded in a December quarter by the Company. The increase reflects firmer demand for SCENESSE® in Europe and consistent growth in the treatment of patients in the United States throughout the 2021 calendar year. Patient treatment in the US is being facilitated by a larger network of Specialty Centers than originally anticipated, as well as acceptance by US insurers to reimburse the drug under Prior Authorization arrangements and include it on formulary lists. This has facilitated greater year-round access to treatment for US patients. Cash inflows from European Expert Centres were also strong, with higher-than-expected collections in the quarter. As witnessed in prior years, European orders tapered off in the December quarter due to lower seasonal demand in the months of less light exposure. 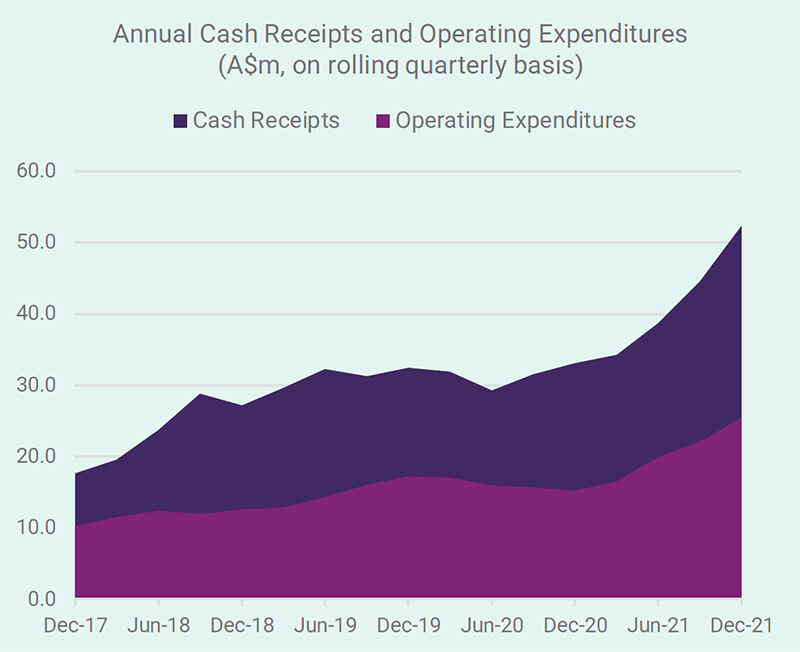 Expenditures from operating activities were $7,624,000 in the December quarter. Payments towards manufacturing and supply costs of raw materials and finished goods continued at levels recorded in recent quarters, as part of a program to fortify stock levels to meet expected future patient demand and to support the expanded range of R&D initiatives. These expenditures were complemented by costs associated with data mining and collection from the use of SCENESSE® in EPP patients. Increasing and preserving staff head count in an environment where the demand for talent is intensifying has been a constant focus for management as it strives to have the dedicated resources in place to support its expansion plans. Expenses towards a non-clinical study – part of progressing the Company’s product formulation portfolio – were also recorded. Corporate and investor relations related expenses typically incurred in the December quarter contributed to an increase in administrative expenses compared to the prior quarter.

In the December quarter the Company, through its Singapore subsidiary entity VALLAURIX PTE LTD, received its first Research Incentive Scheme grant payment under the 2020 award from the Singapore Economic Development Board.

“The success of the Company’s deliberate long-term strategy to establish SCENESSE® as the global standard of care for EPP patients is evident in the 58% growth in cash receipts achieved in the 2021 calendar year,” CLINUVEL’s Chief Financial Officer, Mr Darren Keamy said.

“The Company has built a strong cash position to support the planned organic growth and to also provide a financial buffer to respond to unforeseen impacts like COVID-19 and any adverse changes in the economic environment.

“The Group’s growth and expansion strategy to become a diversified and sustainable specialty pharmaceutical business requires ongoing reinvestment in a considered and careful manner in an ever-challenging operating environment. This reinvestment is impacting our overall expenditure base, but this is being more than sufficiently financed by the growth in cash flows generated from our commercial operations,” Mr Keamy said.

The primary focus of CLINUVEL’s commercial distribution of SCENESSE® for EPP in Europe, the USA and Israel during the quarter was to:

Having established itself as a world expert in photomedicine and melanocortin drug development, CLINUVEL is conducting clinical trials to evaluate the safety and efficacy of afamelanotide for a range of patients with genetic, metabolic, systemic, and life-threatening, acute disorders. The expanded clinical program was also progressed during the quarter with key developments in individual programs reported below.

CLINUVEL announced the expansion of its melanocortin drug portfolio during the quarter with the addition of NEURACTHEL®, a novel formulation of the melanocortin adrenocorticotropic hormone (ACTH), under a supply agreement with a strategic partner. NEURACTHEL®, will be evaluated for patients with neurological, endocrinological and degenerative disorders, who lack alternative therapy. Further updates on this initiative can be expected.

The Company also held the Annual General Meeting of Shareholders in virtual format on 10 November. A record number of shareholders voted on the resolutions of the Meeting which were all voted in favour of the Directors’ recommendations. The Chair and Managing Director presented to the Meeting and the Board of Directors answered shareholder questions. An Operations Update, Investor Webinar and Strategic Update were issued during the quarter and CLINUVEL presented at key conferences, specifically the Morgans Value in the Vines Conference and the Jefferies London Healthcare Conference.

Although the Company is no longer obligated under ASX Listing Rules to publish quarterly cash flow results, it elects to continue to do so to keep its global investors updated regularly. A copy of the Appendix 4C – Quarterly Cash Flow Report for the second quarter of FY2022 is attached.

1 SCENESSE® (afamelanotide 16mg) is approved in the European Union and Australia as an orphan medicinal product for the prevention of phototoxicity in adult patients with erythropoietic protoporphyria (EPP). SCENESSE® is approved in the USA to increase “pain-free” light exposure in adult EPP patients with a history of phototoxicity. Information on the product can be found on CLINUVEL’s website at www.clinuvel.com.

CLINUVEL (ASX: CUV; ADR LEVEL 1: CLVLY; XETRA-DAX: UR9) is a global specialty pharmaceutical group focused on developing and commercialising treatments for patients with genetic, metabolic, systemic, and life-threatening, acute disorders, as well as healthcare solutions for the general population. As pioneers in photomedicine and the family of melanocortin peptides, CLINUVEL’s research and development has led to innovative treatments for patient populations with a clinical need for systemic photoprotection, DNA repair, repigmentation and acute or life-threatening conditions who lack alternatives.

CLINUVEL’s lead therapy, SCENESSE® (afamelanotide 16mg), is approved for commercial distribution in Europe, the USA, Israel and Australia as the world’s first systemic photoprotective drug for the prevention of phototoxicity (anaphylactoid reactions and burns) in adult patients with erythropoietic protoporphyria (EPP). Headquartered in Melbourne, Australia, CLINUVEL has operations in Europe, Singapore and the USA. For more information, please go to https://www.clinuvel.com.

This release contains forward-looking statements, which reflect the current beliefs and expectations of CLINUVEL’s management. Statements may involve a number of known and unknown risks that could cause our future results, performance or achievements to differ significantly from those expressed or implied by such forward-looking statements. Important factors that could cause or contribute to such differences include risks relating to: our ability to develop and commercialise pharmaceutical products; the COVID-19 pandemic and/or other world, regional or national events affecting the supply chain for a protracted period of time, including our ability to develop, manufacture, market and sell biopharmaceutical products; competition for our products, especially SCENESSE® (afamelanotide 16mg), PRÉNUMBRA® or NEURACTHEL®; our ability to achieve expected safety and efficacy results in a timely manner through our innovative R&D efforts; the effectiveness of our patents and other protections for innovative products, particularly in view of national and regional variations in patent laws; our potential exposure to product liability claims to the extent not covered by insurance; increased government scrutiny in either Australia, the U.S., Europe, Israel, China and Japan of our agreements with third parties and suppliers; our exposure to currency fluctuations and restrictions as well as credit risks; the effects of reforms in healthcare regulation and pharmaceutical pricing and reimbursement; that the Company may incur unexpected delays in the outsourced manufacturing of SCENESSE®, PRÉNUMBRA® or NEURACTHEL® which may lead to it being unable to supply its commercial markets and/or clinical trial programs; any failures to comply with any government payment system (i.e. Medicare) reporting and payment obligations; uncertainties surrounding the legislative and regulatory pathways for the registration and approval of biotechnology and consumer based products; decisions by regulatory authorities regarding approval of our products as well as their decisions regarding label claims; our ability to retain or attract key personnel and managerial talent; the impact of broader change within the pharmaceutical industry and related industries; potential changes to tax liabilities or legislation; environmental risks; and other factors that have been discussed in our 2021 Annual Report. Forward-looking statements speak only as of the date on which they are made, and the Company undertakes no obligation, outside of those required under applicable laws or relevant listing rules of the Australian Securities Exchange, to update or revise any forward-looking statement, whether as a result of new information, future events or otherwise. More information on preliminary and uncertain forecasts and estimates is available on request, whereby it is stated that past performance is not an indicator of future performance.