In 2021, CLINUVEL announced its first pilot study (CUV801) to evaluate its drug, afamelanotide, in arterial ischaemic stroke (AIS). This page seeks to answer the most frequently asked questions about stroke. Click the + buttons for a simple explanation of a complex disorder.

How does oxygen reach the brain?

The brain is one of the most complicated and energy intensive organs in the human body and requires constant nourishment. It demands an extremely large and continuous flow of oxygen and nutrients —approximately 25% of our daily cardiac output. Two pairs of large arteries are responsible for ensuring blood flow to the brain (also known as cerebral blood flow or CBF): the internal carotid arteries, and the vertebral arteries. A lack of oxygen or sugars (glucose) in the brain can have catastrophic consequences.

The internal carotid arteries carry blood from the heart along the front of the neck to the anterior (front portion) of the brain, branching off to form the middle cerebral arteries (MCAs) and supplying 80% of our total CBF. The vertebral arteries, on the other hand, carry blood from the heart along the back of the neck, uniting to form the basilar artery and supply blood to the posterior (back) portion of the brain.

How is blood flow distributed within the brain?

The brain consists of three main parts: the cerebrum, brain stem, and cerebellum, with each section consisting of a number of smaller sections essential to our survival. These regions span the entire area of the brain and require constant nourishment and blood flow. This delicate balance is maintained through a network of different arteries, which span across the brain like the branches of a tree, providing a continuous supply of oxygen and glucose. We could not survive without this supply network.

Once blood reaches the brain via the two main artery pairs, blood flow branches off into a network of smaller arteries, arterioles and finally, capillaries. Some of these branches are joined together, forming the circle of Willis, while others divide further and feed the further (distal) portions of the brain via three main pathways:

The blood-brain barrier regulates the transmission of nutrients between the blood vessels and the brain to ensure only the correct nutrients reach the brain. 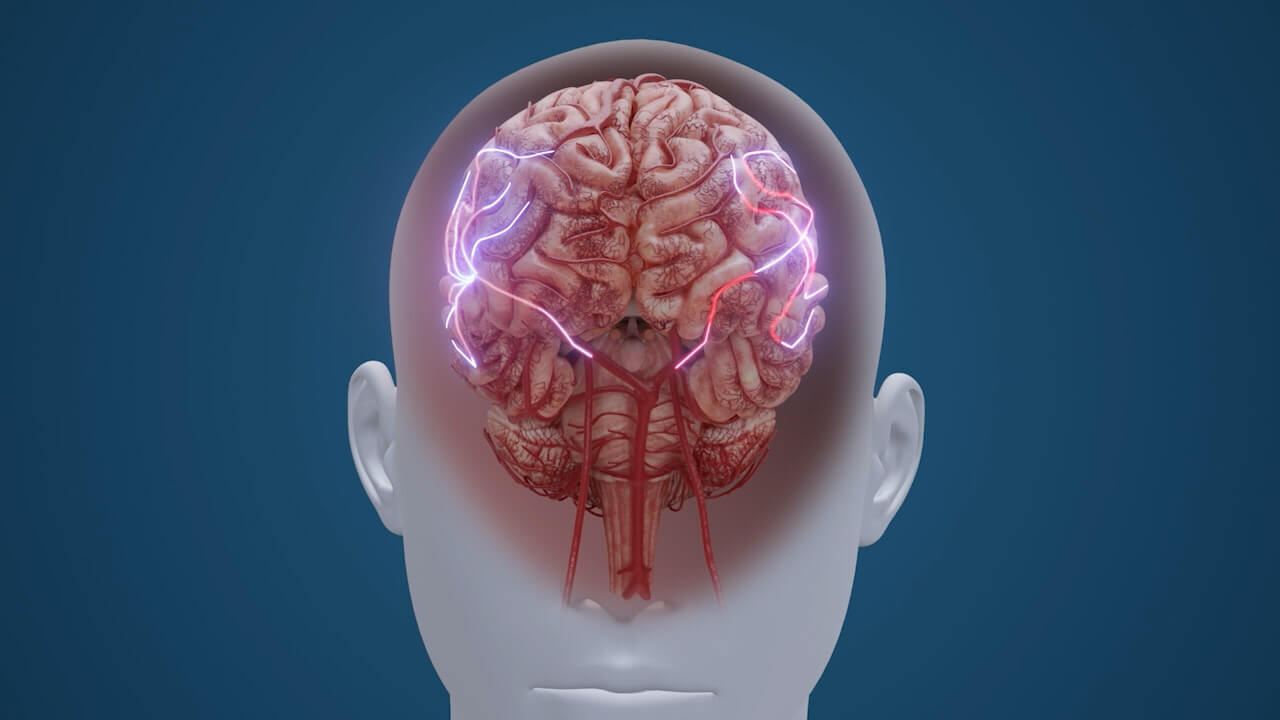 What is the Blood-Brain Barrier?

The BBB consists of various components, but the barrier function comes mainly from the cells that comprise the capillary walls of the BBB, known as the endothelial cells. Each of these cells are closely packed and sealed together to prevent any unwanted leakage to and from the blood.

When trauma occurs the tightly packed endothelium become loose, and the BBB becomes more permeable. This enables toxic blood products (such as haem), as well as other substances (such as drugs) to cross the BBB and cause damage.

The BBB consists of various cells, but the barrier function comes mainly from astrocytes (end-feet) which wrap around the cells of blood vessels (endothelial cells). Unlike in most of the body, the cells that form the capillary walls of the BBB are tightly sealed to prevent any leakage.

When trauma occurs these tightly packed cells become loose, and the BBB becomes more permeable. This enables cytotoxic blood products (such as haem), as well as other substances (such as drugs) to cross the BBB and cause damage.

What is a stroke?

A stroke occurs when the blood supply to a portion of the brain is interrupted or cut-off. A sudden clot lodged in a brain vessel causes an immediate damage. The area of the brain directly perfused (supplied) by this obstructed vessel dies within minutes. This zone of dead brain cells is known as the necrotic core. The area surrounding the core is at an urgent risk of also undergoing the same fate and is called the penumbra: brain tissue, which can be returned to normal function if quick intervention can be offered, and normal blood flow restored.

There are two main types of strokes. An ischaemic stroke is a type of stroke that occurs due to a physical blockage in a blood vessel, which inhibits normal blood flow. A haemorrhagic stroke, on the other hand, occurs when a blood vessel bursts.

There is also a related condition, known as a transient ischaemic attack (TIA), where blood supply is temporarily restricted. Although not classified as a stroke, a TIA is still a medical emergency as it is often a warning sign of a more serious stroke in the near future.

What causes an arterial ischaemic stroke?

An arterial ischaemic stroke is a life-threatening condition which occurs when a type of blood vessel, known as an artery, becomes blocked within the brain. This prevents blood flow (and thus oxygen) to the brain. Instant damage to brain tissue is seen, as the affected area begins to die (known as the necrotic core). This is usually caused by a blood clot, which either forms within the brain, or travels to the brain through an artery from another area of the body.

Complications from atherosclerosis are the main causes of clot development which trigger ischaemic strokes. Atherosclerosis refers to the build-up of cholesterol and fatty deposits (plaque) within the arteries. This progressive accumulation of plaque thickens the arterial wall and narrows the internal diameter of these vessels, known as the lumen. A narrowed blood vessel means less blood can flow through the diseased arteries at one time. If the plaque ruptures, the debris can form a blood clot within the vessel, blocking blood flow and causing a stroke. The blockage can affect either the arteries leading to the brain, or the smaller vessels that supply more distal sections.

What happens during an arterial ischaemic stroke?

Symptoms of an ischaemic stroke can differ depending on the location of the blocked artery (and thus the region the brain deprived of blood and oxygen). However, the most common symptoms are:

What is the ischaemic cascade?

Once a clot occurs and blood flow is interrupted, a series of events known as the ‘ischaemic cascade’ begins, as the brain becomes progressively more damaged. This series of biochemical reactions is the consequence of a lack of oxygen, as well as the main cause of long-term damage, potentially lasting for days following the removal of a clot. The term ‘cascade’ refers to the misnomer that the events occur linearly. However, it is now believed that the ‘ischaemic cascade’ is in fact a vicious cycle, with processes occurring circularly and exacerbating one another. The main events are summarised below: 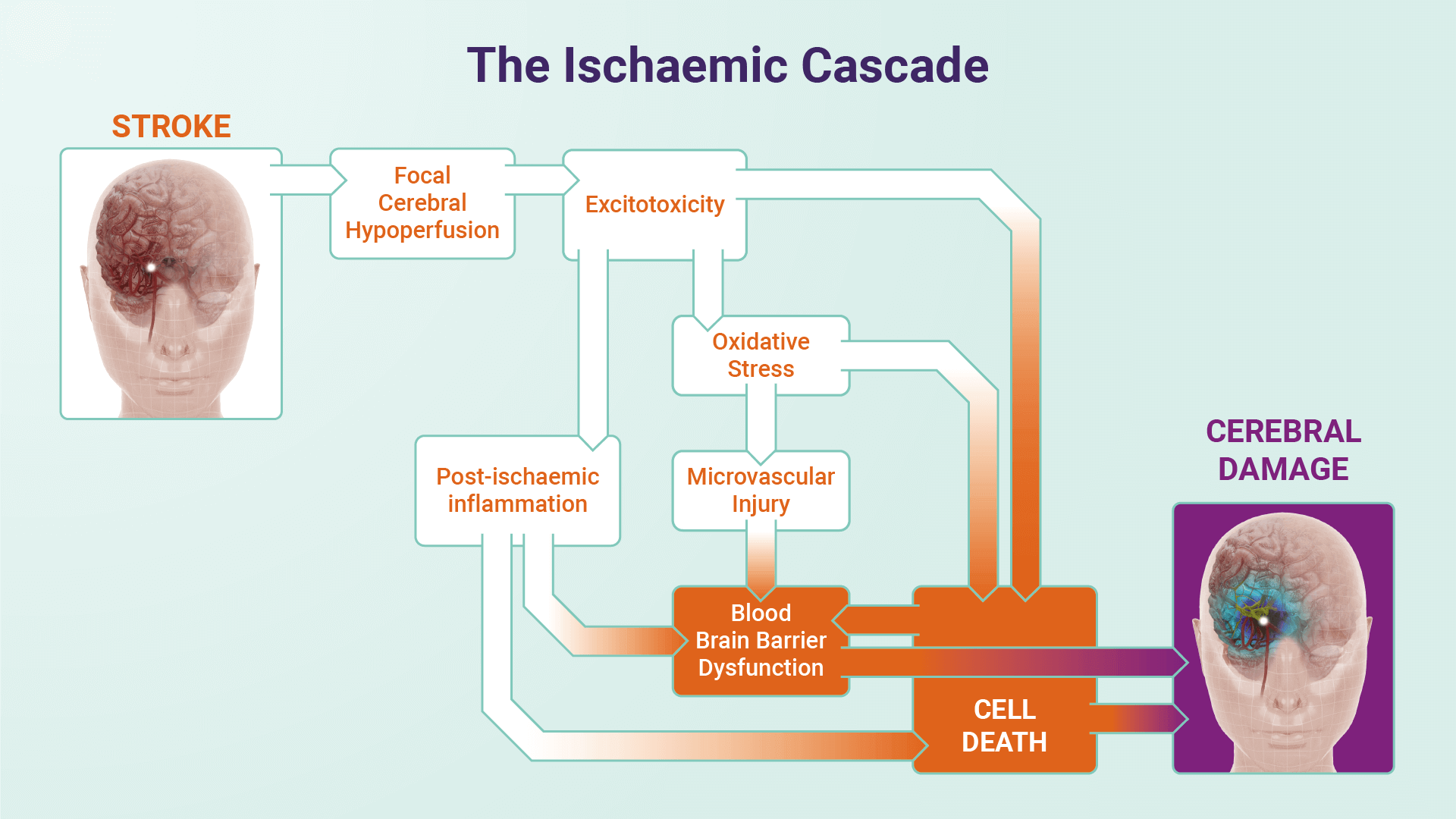 What is the impact of an arterial ischaemic stroke?

Strokes can have varying short- and long-term effects, depending on which part of the brain is affected and how quickly treatment is received. Tragically, around 40% of arterial ischaemic stroke patients do not survive the first year following their stroke.

Of those patients who do survive, as many as 50% will experience permanent lifelong disability, which may worsen over time. 25% will experience another stroke within five years and 12% are readmitted to hospital within 30 days of discharge.

The full effect and impact of an ischaemic stroke depends on a multiplicity of factors, including the exact location of the blockage and physical health of the affected individual.

Stroke patients with clots closer to either the internal carotid or vertebral arteries are at a higher risk of more severe symptoms or death without treatment, as these clots restrict blood flow to a larger area of potentially affected tissue.

The structure of the cerebral arteries is similar to that of a tree. The internal carotid and vertebral arteries would be the central roots that supply the trunk, the circle of Willis. The cerebral arteries are the branches and twigs in the periphery. The closer the interruption is to the root of the blood flow; the more damage is inevitably caused.

Current treatments for ischaemic stroke focus on reperfusion therapy, which means restoring blood flow to the brain. Treatments are divided into two categories: thrombolysis, where physicians attempt to dissolve the clot with drugs, and thrombectomy, where physicians use a medical device to physically remove the clot from the vessel. Unfortunately, the majority of stroke patients do not benefit from either therapy because it is not offered within the internationally accepted critical treatment window of four and a half hours (for thrombolysis), or because the clot is lodged in inaccessible parts of the brain (M2 branch and higher).

The most important factor in successful reperfusion therapy of acute ischaemic stroke is early intervention. However, to be selected for reperfusion therapy, candidates have to undergo a neurological evaluation first. A series of standardised national and international surveys must be performed, such as the National Institutes of Health Stroke Scale (NIHSS), alongside brain scans.

What are the differences in stroke treatment?

Thrombolysis and mechanical thrombectomies both aim to restore oxygen and blood flow to the area of the brain affected by a stroke. Thrombolysis attempts to dissolve a clot with drugs, whereas a thrombectomy uses medical devices to remove the clot mechanically. The choice of therapy depends on a multitude of factors, including time to treatment intervention, clot size and location, the physical health of the patient, and – importantly – the assessment of the treating physician.

A thrombectomy refers to the removal of a thrombus (blood clot) under imaging guidance. Thrombectomy terms vary depending on the specific procedure and device used. For example, endovascular therapy (otherwise known as endovascular thrombectomy or EVT) uses microcatheters (thin tubes visible under X-rays) inserted into the arm or groin, which are then guided to the site of the injury to remove the clot. 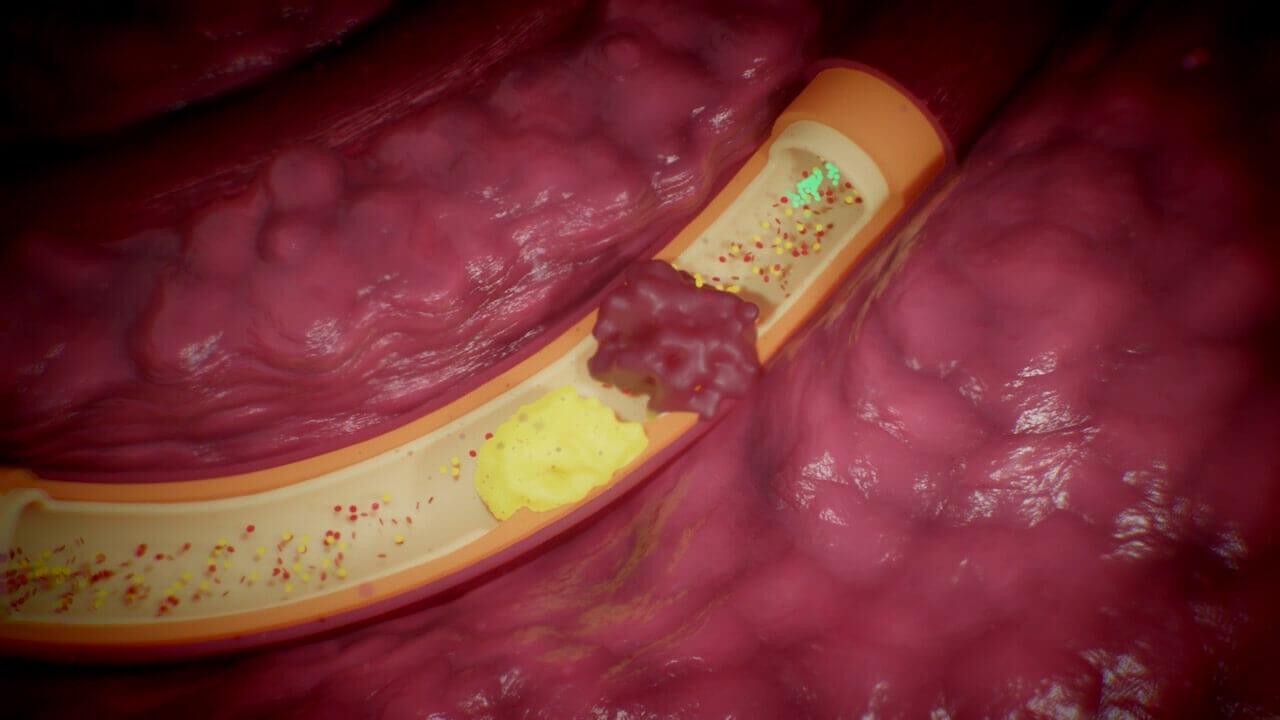 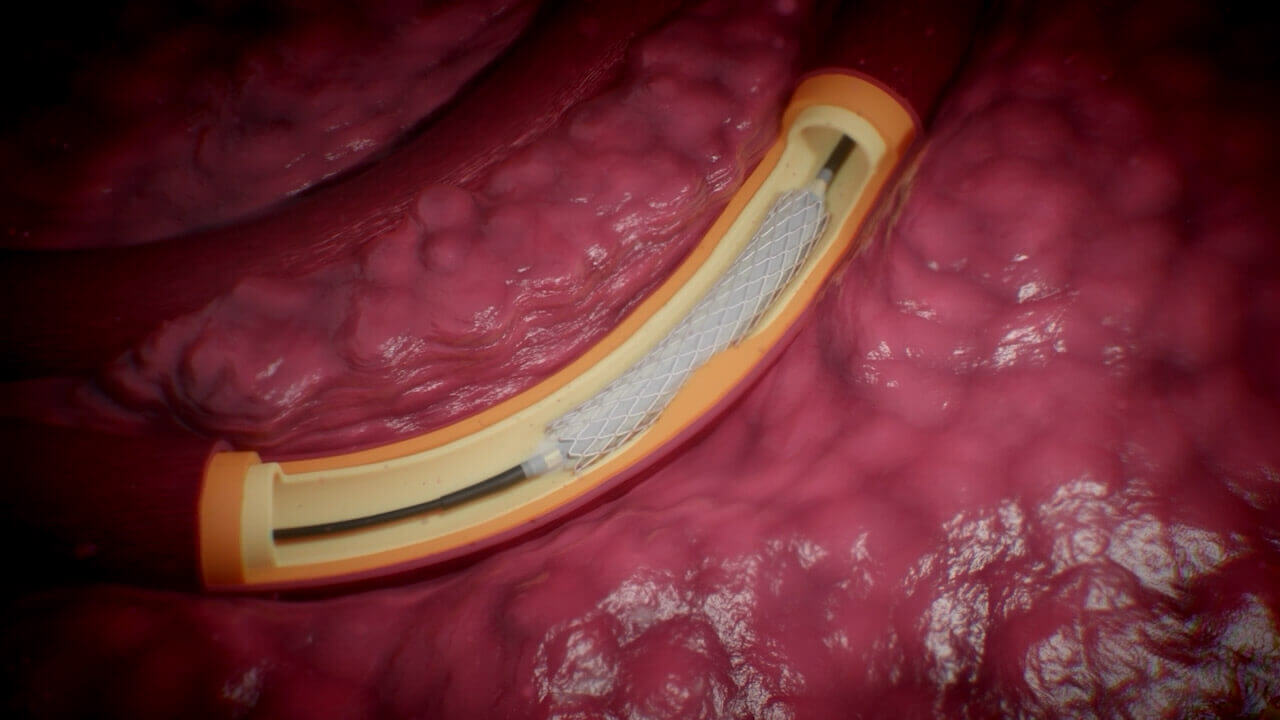 Does everybody who suffers a stroke receive treatment?

Unfortunately, the majority of stroke patients do not benefit from standard therapy because it is not offered within the internationally accepted critical treatment window of 4.5 hours (for thrombolysis), or because the clot is lodged in inaccessible parts of the brain (M2 branch and higher).

Intravenous thrombolysis (IVT) with alteplase is considered the current mainstay of treatment for acute ischaemic stroke, provided that treatment is initiated within 4.5 hours of clearly defined symptom onset. However, 85% of patients remain ineligible for current treatment, as they fall outside of the current treatment window by the time they receive medical care.

Only an estimated 10% of patients with acute ischaemic stroke present early enough to qualify for mechanical thrombectomy within six hours.

Why do some people receive treatment so late?

Recognising and responding to the symptoms of a stroke are critical steps in a patient’s ability to receive treatment. Some reports suggest, patient delay has been responsible for as many as 70% of stroke sufferers not arriving at an emergency department in time to be administered lifesaving therapy. Lack of patient education and fear of diagnosis are two of the main reasons why high rates of patient to hospital delays are seen.

The reasons for delays in acute stroke treatment are varied and heavily dependent upon the context of both care and environment. To understand the potential for delays to occur, the acute stroke timeframe can be broken down into four phases:

Recent studies have shown the importance of the patient in determining time to treatment, known as pre-hospital delay. One of the most important factors repeatedly found in studies analysing pre-hospital delay is the recognition of symptoms and the presence of bystanders who were able to provide assistance. Understanding the symptoms and severity of a stroke, and seeking immediate medical assistance, has been shown to significantly reduce a patient’s time to treatment.