Caring for skin from birth to 18 months

No longer protected inside its mother, a newborn child must adjust to a host of changes in their new environment. The world outside the womb can be harsh and, as the external barrier, the skin is the body’s first defense against these conditions. An infant’s skin must adapt to tackle a variety of chemicals, weather conditions, physical stresses, skin disease and attack from microorganisms, such as bacteria or viruses.

Until recently, little has been known about the structure of babies’ skin due to ethical issues of using certain experimental methods on infants. With the advent of newer, noninvasive techniques, however, we are beginning to learn more about the unique qualities of young skin and how best to care for it. 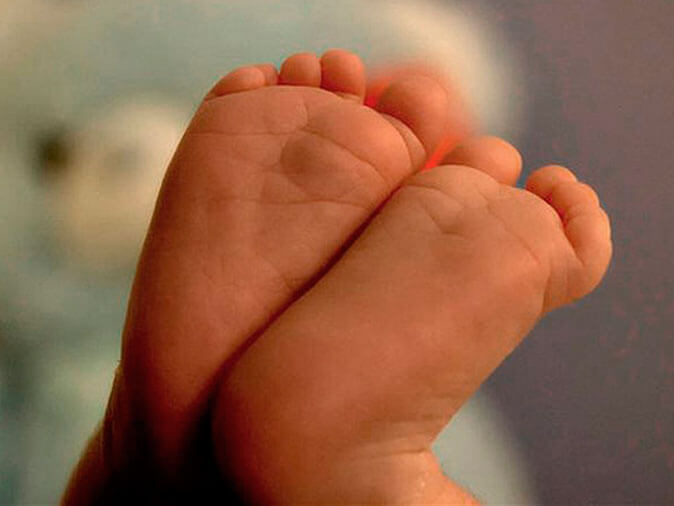 An infant’s skin can be up to 5 times thinner than that of an adult, so it is far more delicate and sensitive – even compared to that of older children. At birth, babies have quite dry skin which quickly becomes hydrated within the first few weeks. This continues to such a point that older infants (8-24 months) actually have skin which is generally better hydrated than adults. Similarly, the skin of a baby is quite rough when they are first born, but quickly softens and smoothes out by around one month of age; this is linked to the increase in the water content of the skin.

While the amount of water is generally higher in baby skin, it does fluctuate more than in adult skin. One of the reasons for this is that skin cells contain a mixture of molecules called the NMF, or Natural Moisturising Factor. These molecules attract and absorb water, keeping the cells hydrated. Baby skin has less of these molecules, making it less able to retain moisture.

Babies have fewer lipids (fats) in their skin than adults. Lipids are important for creating a solid barrier of the skin, which could be one reason that infant skin does not function as such an effective defense against physical and chemical damage. Their skin is more vulnerable because this barrier role of the skin is still developing. Premature babies, in particular, have skin which is less well developed and are therefore more susceptible to a number of environmental factors, such as abrasion and water loss. Before 30 weeks gestation, the top layer of skin (called the epidermis) is weak, thin and relatively immature; its formation is mostly completed by 34 weeks.

Babies have smaller skin cells than adults and these are closely crowded together. This is because their skin cells multiply at a high rate, being more quickly renewed and sloughed off at the surface.

The following guidelines for infant skin care are provided by the Royal Children’s Hospital in Melbourne.

It is recommended that a baby be bathed approximately 2-3 times per week in warm water; excessive bathing may remove the skin’s natural oils (sebum) and cause their skin to dry out. It is also advised that the use of harsh soaps be avoided as they may contain irritants or allergens.

When a cleanser is necessary, many brands offer gentler options. The skin should be dried carefully, particularly in the creases of the neck, groin and armpits. An emollient (a substance which moisturises and softens skin), in the form of a cream or lotion, should then be applied within three minutes. This can be applied up to three times daily and is particularly important for babies with dry, flaky or sensitive skin.

For babies with eczema or other dry skin conditions it best to avoid the use of soaps altogether, using moisturisers as a substitute when bathing, as well as applying them frequently at other times. Colder temperatures can also lead to excessively dry skin, at these times it may be necessary to wash less frequently and apply moisturiser more often. 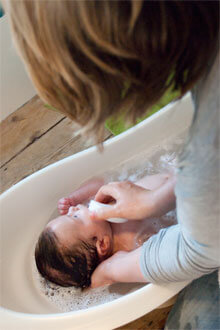 Nappies should be changed regularly, and the skin in these areas cleansed with warm water and a small amount of mild soap or moisturiser. Given the sensitive nature of babies’ skin, along with its tenancy to absorb substances more easily, it is advised that the number of products you expose your baby to is minimised, sticking only to the essentials described above.

Where possible, babies should be kept out of the sun. Where sun exposure or time outdoors is unavoidable, infants can be protected using sun protective clothing, hats, sunscreen, sunshades and ambient shade.

The skin and bodies of infants are not able to regulate temperature as well as adults. As a result, they are more vulnerable to over-heating or becoming too cold in extreme conditions. This is particularly important for babies and young children who are not capable of removing their bedding or adding an extra layer of clothing themselves.

Stamatas, GN et al. 2011, ‘Infant skin physiology and development during the first years of life: a review of recent findings based on in vivo studies’, International Journal of Cosmetic Science, 33(1):17-24.