CLINUVEL continued to progress the commercial distribution of SCENESSE® (afamelanotide 16mg)¹ in Europe and the USA in the September quarter 2020, despite a difficult operating environment. The quarter encompasses a period in the northern hemisphere where exposure to visible (HEV) and ultraviolet (UV) light pose the greatest risk to patients with erythropoietic protoporphyria (EPP), and thus treatment demand is generally higher.

Cash receipts for the September quarter 2020 were $12,015,000, 22.8% higher than cash receipts of $9,782,000 in the same quarter of 2019. After expenditures on operating activities, net cash flow from operating activities was strong at $7,881,000 in the quarter. The stronger quarterly results in cash receipts reflect the first receipts from the commercial distribution of SCENESSE® in the US, along with European orders received and paid later in the calendar year due to impact of the coronavirus pandemic.

CLINUVEL’s cash reserves have progressively increased since the commencement of commercial operations in June 2016 (refer Graph 1). After a 23% annual increase in the financial year ending 30 June 2020, cash reserves increased by a further 9% across the September 2020 quarter, to $72,759,000, continuing the trend of cash flows generated from operating activities. The 9% increase in cash reserves is after the distribution of a full-year dividend to shareholders of $1,235,000, being $0.025 per ordinary share. 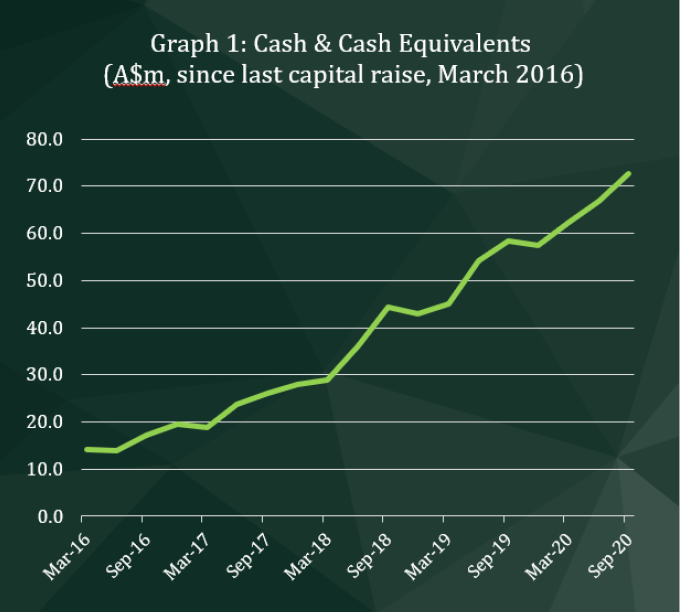 Graph 2 shows CLINUVEL’s annual cash receipts at each quarterly timepoint since the June quarter 2017 (on a rolling annual basis). The increase from the June 2020 quarter indicates receipts from the distribution of SCENESSE® have been received later in the 2020 calendar year when compared to the prior year. This is largely attributed to changes in the timing of placing product orders by some treatment centres caused by the delay due to the COVID19 pandemic. The movement in the rolling annual cash receipts contrasts with the controlled growth in annual operating expenditures, where the Company has steadily increased investment to support future growth, including head count and the supply chain.

Cash inflows are predominantly in Euro currency, but more recently in other currencies as well. For accounting purposes, at the end of the September quarter 2020, cash held in foreign currencies were translated to Australian dollars, resulting in an upwards revaluation of $75,000. 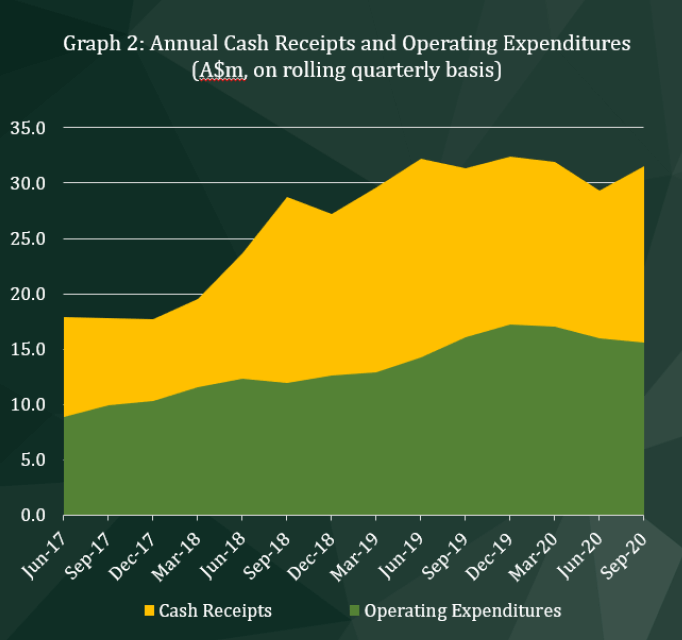 Expenditures from net operating activities rose by 24.6% to $4,277,000 in the September quarter 2020. These do not include the impact of other receipts, such as interest received from placing cash reserves on term deposit with financial institutions. Staff costs rose by 33.8% to $1,912,000, reflecting the timing of annual remuneration-related payments. Payments for materials and services attached to the Company’s product pipeline, including PRÉNUMBRA® and the topical formulations under development, saw research and development costs rise from $102,000 in the June quarter 2020 to $391,000 in the September quarter 2020.

Despite the adverse operating environment in the September quarter 2020, the Group continued to grow its commercial operations in Europe and the USA, and expand the research and development activities focussed on novel treatments for patients with severe genetic, skin and vascular disorders who lack therapeutic alternatives.

Throughout the calendar year, the majority of Expert Centres in Europe have continued to prescribe SCENESSE® to meet ongoing patient demand for treatment. A small number of Centres had either deferred orders or reduced order sizes in the initial months of the pandemic, but in more recent months access to patients has resumed with easing of restrictions across Europe. Despite the ongoing uncertainty surrounding the pandemic, patient demand for SCENESSE® has remained high and Expert Centres are working to facilitate ongoing treatment.

In the USA, the distribution of SCENESSE® has progressed ahead of the Company’s planning. Twenty-six Specialty Centers (30 were planned by July 2021) have been trained and accredited to administer SCENESSE® and over 55 national and local private insurers have agreed to reimburse SCENESSE® either under Prior Authorization arrangements, acceptance as a special drug or as part of their formulary listing.

The Company’s key activities in the quarter included:

The Company also continued its exchanges with the Therapeutic Goods Administration (TGA) on its application submitted under a priority registration pathway for SCENESSE® to be the first therapy for adult EPP patients in Australia. The TGA advised its decision to approve the application for marketing authorisation of SCENESSE® in Australia on 26 October 2020. Work also continued during the quarter with clinical experts on the protocol of a multicentre Phase IIb clinical study of SCENESSE® in combination with narrowband UVB phototherapy, to treat the pigment loss disorder vitiligo.

“The continued demand for SCENESSE® from EPP patients in Europe and the USA bolstered the Group’s cash receipts in the September quarter,” CLINUVEL’s Chief Financial Officer, Mr Darren Keamy said.

“The further rise in our cash reserves after the payment in the quarter of a third annual dividend as the northern hemisphere winter months approach is welcome in the context of the adverse operating environment and the ability it provides to self-finance the growth of commercial operations and the expansion of our research and development activities, ” Mr Keamy said.
Although the Company is not obligated to publish quarterly cash flow results, it elects to continue to do so to keep its investors regularly and periodically updated. A copy of the Appendix 4C – Quarterly Cash Flow Report for the first quarter of FY2021 is attached.

Pursuant to Listing Rule 4.7C and as disclosed in Item 6.1 to the attached Appendix 4C, $100,000 was paid in respect to Non-Executive Director and Managing Director fees.

1 SCENESSE® (afamelanotide 16mg) is approved in the European Union as an orphan medicinal product and the world’s first systemic photoprotective pharmaceutical for the prevention of phototoxicity in adult patients with erythropoietic protoporphyria (EPP). SCENESSE® is approved in the USA to increase “pain-free” light exposure in adult EPP patients with a history of phototoxicity. Information on the product can be found on CLINUVEL’s website at www.clinuvel.com.